RACEVETTE PRODUCTS
Welcome to the Dragvette Products website.
All "Dragvette Products" were developed at the raceway to solve problems that I encountered with my STOCK IRS 10.81 quarter mile Corvette. You can bet the 1.45 sixty foot run that is shown above has given my rear suspension kit the ultimate real world test. Time after time!  Let the Dragvette 6-Link put the fun back into drag racing by solving your safety, consistency, traction and breakage problems. 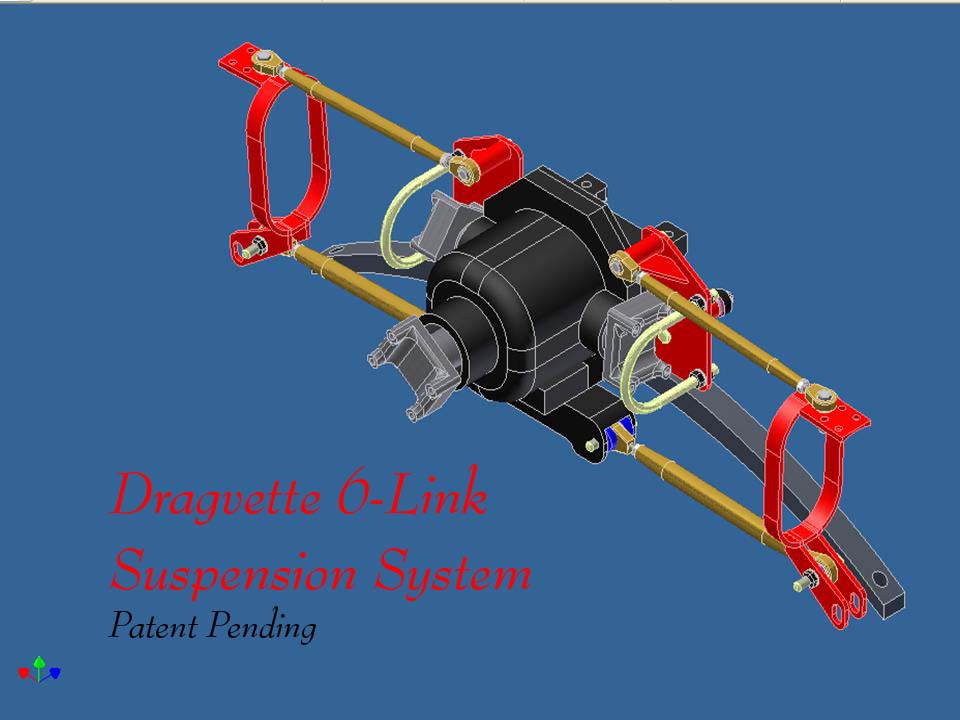 NOW is the time to update your suspension. A  Dragvette 6-Link Suspension System. Will make your Corvette a SUPER THREAT ! Used by road racers, auto crossers, drag racers and enthusiastic street drivers.

Originally developed for drag racing. It soon became apparent The 6-Link improved all types of driving disciplines. Every type of driving requires maximum traction. The 6-Link does this by establishing the largest tire contact patch by holding the tire straight up and down to the pavement. Old bias tires may have worked better with the camber moving all over but today's radials with stiffer tread caps don't. Road racer Brett Jarvis set the 6-link at 1/2 negative camber and found the middle and inside edge of the tire to be 180 degrees while the outside edge was 170 degrees. This set up still allowed Bret to outperform his competition by 2 seconds per lap when racing at Road America in Wisconsin. He plans to adjust the camber to less than 1/2 deg for his next race. You can adjust the system to hold 0 degrees though out the travel of the suspension or you can set it a any camber and it will hold that same amount of camber though out the 6-Links travel. A small camber setting will have minimal effect on the straight line performance. We recommend 0 degrees camber for drag racing and enthusiastic street driving.

While Corvette drivers make all types of changes to their rear suspension including springs, shocks, changing to coil-overs, double adjustable shocks, dual mount springs, shark bite systems, all in the pursuit of better handling. The truth is they can all help but none of them fix the real problem and that's getting as much of the tread on the road as possible.
All "Dragvette Products" were developed at the raceway to solve problems that I encountered with my STOCK IRS 10.81 quarter mile Corvette. You can bet the 1.45 sixty foot run that is shown above has given my Dragvette 6 Link suspension system the ultimate real world test. Time after time!  Let the Dragvette 6 Link put the fun back into drag racing by solving your safety, consistency, traction and breakage problems.
Why did I develop the Dragvette 6-Link

I developed the "Dragvette 6-link" for two pressing reasons and soon realized there were three reasons. I was breaking parts in the rear end on a regular basis. I simply couldn't afford to keep doing this. The traction was not always there. Veering down the strip erratically seemed dangerous.
Some thing just wasn't right in the rear suspension. I decided to analyze the geometry by laying on the garage floor and theorizing. What was the cause and effect as the Corvette made a hard launch or making a hard turn? It slowly became evident as I stared.  The half shaft pushes into the differential when ever you make a hard turn or a hard launch. There isn't a thrust mechanism in the differential. The half shaft simply shoves the side yoke into the differential until the side yoke hits the cross pin in the carrier. The differential is now supporting the Corvette while turning the tire. The 6-link top strut takes this abuse and allows the differential to simple turn the tire. This takes the side thrust off the half shaft, side yoke, and carrier. These are the things I was busting up in the late 80's.
The traction seemed minimal and I was on my third set of slicks the first season, The inside corner of the tire was simply wearing away during the burn outs. By shortening the bottom strut and relocating the mounting position I was able to eliminate the radical camber change the rear tire was going through. This allowed the radial tire which is not the tire this system wa
Proudly powered by Weebly